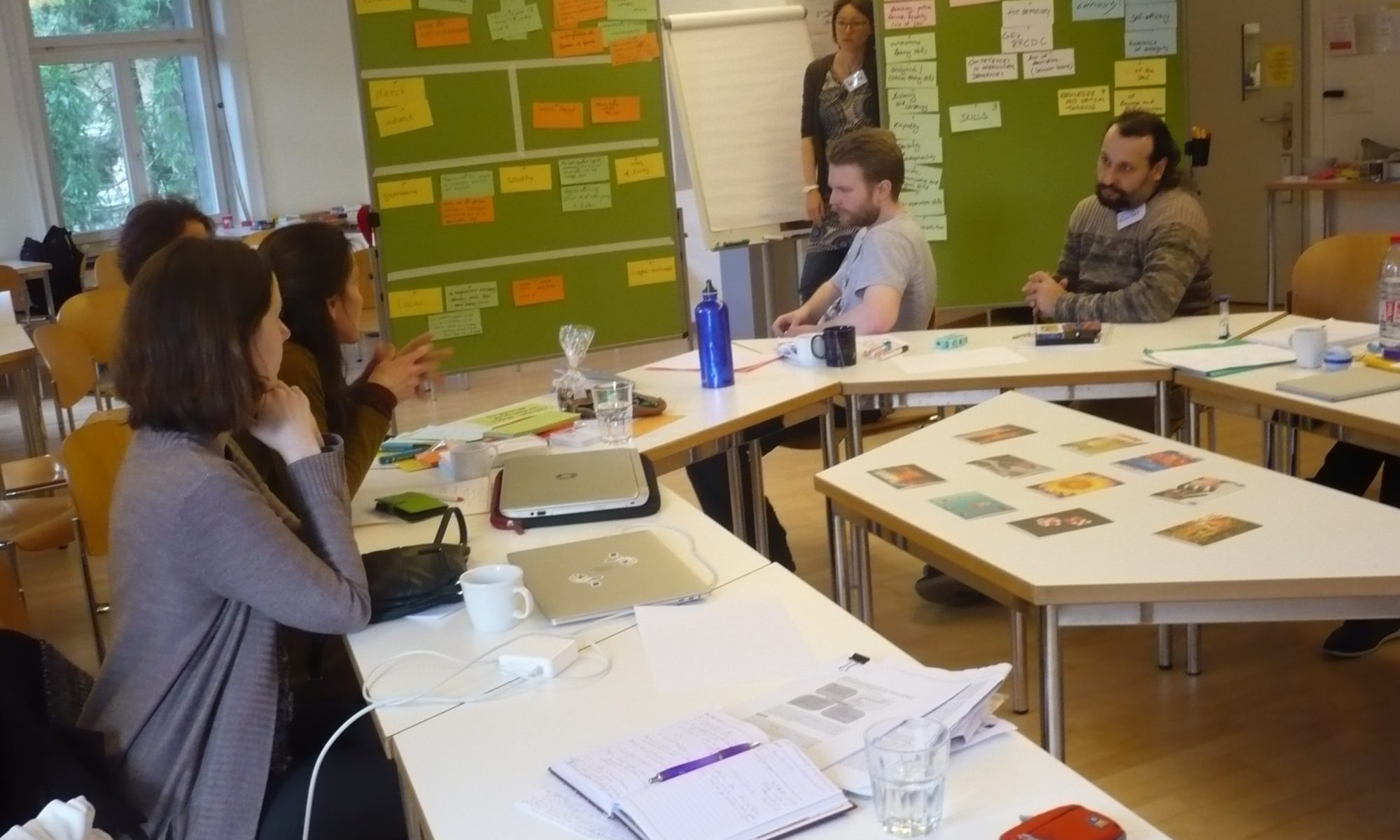 The second meeting of the project Democracy and Games: Analog and Digital Game-Based Learning Tools for Youth Work (2019-2-DE04-KA205-018330) was held in Zurich from the 14-th to the 15-th of February 2020 and brought together ten participants representing GIGA (German Institute of Global and Area Studies), Demokrative (Zurich), DARE Network, Intercultural Institute Timisoara, DA2 Trucados (Almunecar) and Culture Goes Europe (Erfurt).

The warm up session facilitated by Rebecca Welge, transparently and playfully introduced the topic and comprised: Two exercises (one based on metaFox deep pictures – very useful in many learning and training circumstances and the Empathy Game) and a writing race. Each participant chose a picture and explained his/her choice in the context of the project (see our selection!): responsibility, energy, hope, practical approach, meaningful content, real life challenges, freedom, beauty, colour. Then, by working in two pairs, we rolled the dice, took a memory/imagine/who is card and answer the question. Our partner had to mime (take the posture according to) our answer for the whole group (the first round) and to draw it (the second round). And we obviously had to do the same. The last part of the warm up was a race between two teams who had to write down words starting with each letter of E+ DEMOGAMES. The palette of asscoiations showed that we were pretty aware of what we have to do in the next two years!

The whole meeting was a very smartly crafted combination of demanding, process-oriented and result emphasizing tasks. Some of us attended a session on game design: rules, stages, end, winner, structure (competition, cooperation, single player etc.), a theme to fill the mechanics (the German way) or finding the best mechanics for our theme (the American method), story, the first prototype, testing and putting it “on the market”. Robert Lovell’s message was extremely clear: the game makers do not play (an easy game). They work a lot in order to offer the players serious games. Then he showed us an encyclopedia of mechanics (authored by G. Engelstein&I.Shalev) in order to find more specific tools for various game ideas we were submitting.

The content was explicitly discussed in the session facilitated by Saskia Lovell. She emphasized very diverse ways people think about democracy by asking us to write an example of democracy and an example of lack of democracy and then organizing our cards in areas: mechanisms, principles, direct-indirect democracy, governance, society, way of living, local level and supranational level (see the map of our democracy). We understood that the game players will have the same diverse perceptions and we have to decide which components of democracy will be depicted in our games. Some people are more sensitive to values and principles. Other citizens need to practise specific procedures and other ones might be interested in what endangers democracy at local level etc. As different studies emphasize on that the main challenges of democracy deal rather with the quality of public discourse (manipulation, misinformation, hate speech, lack of arguments on the side of politicians, citizens, media, foreign actors etc.), than with the status of elections (they deteriorate after the public debates) this might have consequences for game design. Therefore, it would have sense to develop some tools to enhance the public communication and the analysis skills.

We kept dealing with the content aspects (what elements of democracy are embedded in our games) in the session facilitated by Călin Rus. He thoroughly presented the Reference Framework of Competences for Democratic Culture developed by the Council of Europe (20 competences organized in 4 categories: values, attitudes, skills, knowledge and critical understanding). The participants decided that descriptors (developed within the same CoE project) would be more useful for the game design than competences and the fittest descriptors to our games would be chosen soon. Eugenia Khoroltseva would reasonable have wanted to see curiosity as such in the framework. Some participants inferred it from openness, self-efficacy, autonomous learning skills or knowledge and critical understanding of the world.

All participants agreed to root the games in real life challenges, not to miss democracy in the mechanics of the game, to offer a complete rank of games (from simple to complex), and to develop behavior through the games. At the end of the first day, the existing examples were organized by three groups and Rebecca in order to make the next practical steps: how the participants will cooperate to design certain games, who (person or organisation) will do what, what ideas/examples will be kept and what has to be added (Dark stories, for instance).

At the end of the meeting, the plan got more specific features (stages, deadlines, new template to be developed, joint tasks, new contributions and help to be collected – using the ADAM platform of University of Basel to share our work, deciding the roles of Participedia, using GIGA system of training youth to design games during C1 in Spain, asking the participants in C1 to suggest concrete game elements – stories, pictures, etc.).

Besides the intellectual outputs, which I specifically described, the monitoring and evaluation will comprise our way of working and how we deal with the objectives of each stage/activity of the project. The current meeting made clear the fact that honest, courageous, meticulous and complex insights would abundantly come out regarding all aspects of the game development process.

Background studies on the context: